The Answer to an Abundance of Vegetables!

Warm weather, gardens and a bounty of fruits and vegetables can be daunting!  Tomatoes, peppers and cucumbers magically appeared on the counter this week.  What does one do with all of the produce when it is warm and going to the beach sounds like a good plan...well, make gazpacho!

I had never made it before but I had eaten it a number of times.  One thing for certain, gazpacho is prepared many different ways..depending upon one's taste.

Gazpacho is a liquid salad from the southern Spanish region of Andalusia, made of ripe tomatoes, bell peppers, cucumbers, garlic, and bread moistened with water that is blended with olive oil, vinegar, and ice water and served cold.  Gazpacho was a poor people's food.  It was traditionally eaten by workers in the fields.  Its humble beginnings included bread, water and olive oil pounded in a large bowl.  Gazpacho has changed just a bit over the ages but still has a vegetable-base of ripe tomatoes, bell peppers and cucumbers.

I had three different gazpacho recipes in front of me and didn't know which one to make.  So, I combined the ingredients in two of them and took the recommendation to not make V-8 juice by over-processing! 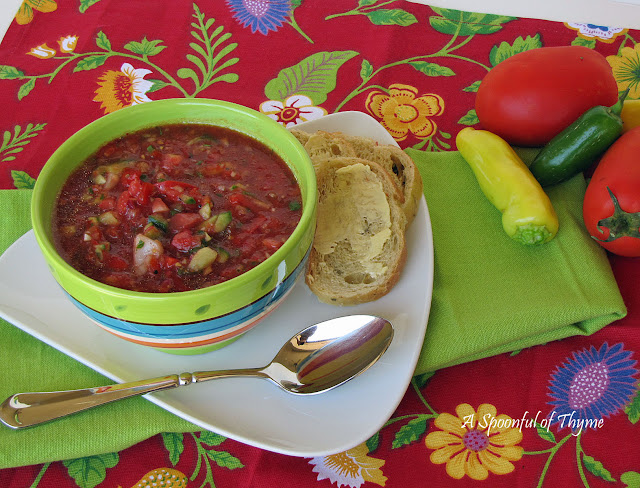 Rough chop the vegetables and process each one separately in the food processor fitted with a steel blade.  Pulse until it is coarsely chopped.  (Do not over-process!!)

After processing each vegetable, combine them in a large bowl and add the garlic, tomato juice, vinegar, olive oil, lemon juice, cilantro, cayenne, (Tabasco, if desired), salt and pepper.  Mix well and chill before serving.  The longer gazpacho sits the more the flavors develop. 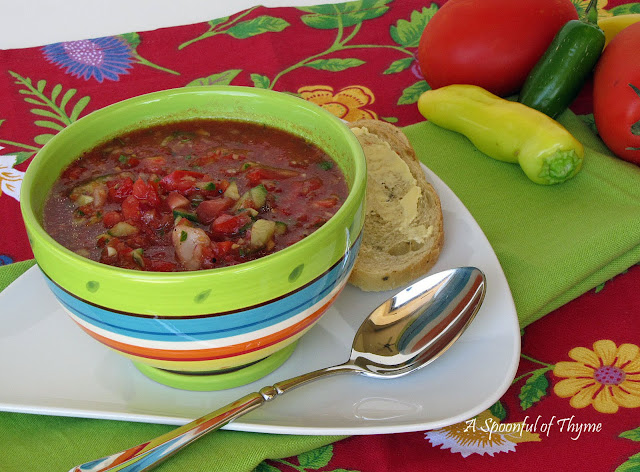 The soup was thick and flavorful.  I think if I make it again, I will add additional tomato juice so it is more soup-like.  It was a bit too thick for our liking.  I would also add some croutons or little toasts brushed with olive oil and garlic.  I served it with jalapeno bread which had just the right amount of "bite".  The soup is quite forgiving...you can adjust the vegetable proportions to fit your taste.

This made quite a bit of gazpacho so I took some to my neighbor who shared with me her recipe for gazpacho.  She uses V-8 juice instead of tomato juice and she adds some celery to the mix.  She said that they like to top their gazpacho with some chopped avocado and baby shrimp.

We tried her variation and decided that we liked the toppings....avocado and shrimp make everything taste better! 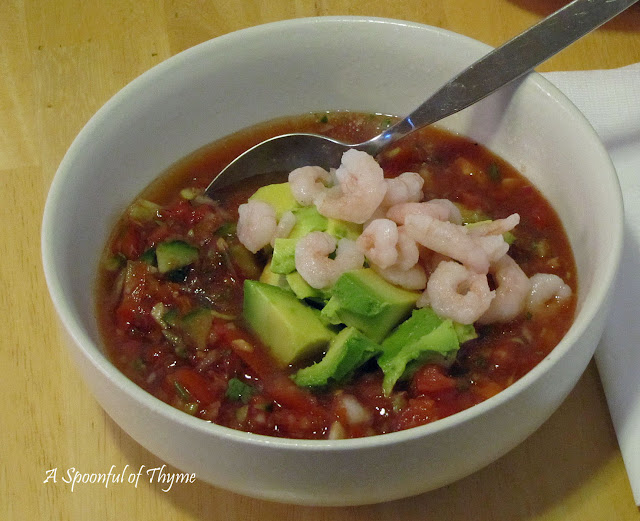 This was an excellent fresh, cold, soup-salad!

I am participating in Fat Camp Friday hosted by Miranda at Mangoes and Chutney and Seasonal Saturday hosted by Roz at La Bella Vita.